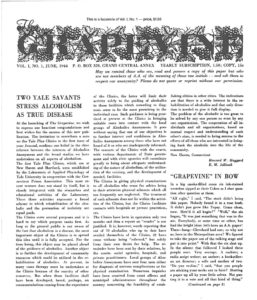 The AA Grapevine has evolved over the past several decades from a humble newsletter into an international journal publication of Alcoholics Anonymous that is intended to be a “meeting in print” and the “voice” of the AA  fellowship. The Grapevine aims to represent the experience, strength, and hope of its members, reflecting a broad geographical swath and range of experience by age, race/ethnicity, belief, and socio-economic status.

Volume 1, No. 1 is a republished facsimile of the inaugural issue of the Grapevine, started in 1944, by six alcoholics, sipping Cokes in a smoke-filled room in New York City.

This issue features a headline article, Two Yale Savants Stress Alcoholism As a True Disease, which describes a clinic, started by the Lab of Applied Physiology at Yale University, in cooperation with the Connecticut Prison Association, to promote the idea that alcoholism is a disease, which was not a widely accepted idea at the time. Among its stated purposes, the clinic sought to develop resources that could be utilized to rehabilitate alcoholics, promote interest and confidence in Alcoholics Anonymous, and provide examinations to address the alcoholic’s physical ailments that had been neglected during the progression of their diseases.

It also features a poignant editorial, The Shape of Things to Come, penned by Bill W., on the future of AA, in which he reflects on the expansion of Alcoholics Anonymous over five years, from “little clusters of twos and threes” to “hundreds of centers shedding their warm illumination upon the lives of thousands.”

Also notable is a brief paragraph about the reopening of High Watch Farm in Cornwall Bridge, Connecticut, the first recovery center for alcoholics based on the principles of AA. 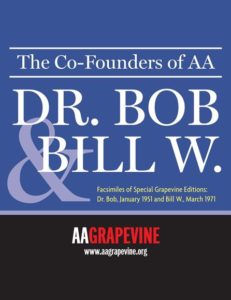 This is a set of republished facsimile Grapevine editions, honoring Dr. Bob and Bill W., the co-founders of the fellowship of Alcoholics Anonymous, upon their deaths.

The Bill W. Issue features profiles of the people who helped and inspired Bill and Bob to get sober, create the fellowship of AA, and help others, including:

The Dr. Bob issue contains a brief but touching biography of Robert Holbrook Smith, a colorectal surgeon, whose alcoholism landed him in hospitals and sanitariums more than a dozen times prior to sobriety. The author describes Dr. Bob’s journey from a “squirrel cage existence… Staying sober to earn enough money to get drunk… Getting drunk to go to sleep… Using sedatives to quiet the jitters… Staying sober to earn money… Getting drunk…” to finding purpose and a will to live in sobriety by helping other alcoholics get and stay sober.

This is a hardcover facsimile of the First Edition of the AA Big Book, complete with the 29 original personal stories, originally published in April 1939. This special edition features red hardcover binding with gold lettering, the retro looking “circus” book jacket cover, and is printed on thick paper.

Our Great Responsibility – A Selection of Bill W.’s Conference Talks 1951-1970

This book, published in 2019, is comprised of sixteen addresses by Bill W. at AA’s annual General Service Conferences, in which he muses on the origins of AA, the concepts of the group conscience and trusted servant, AA in the era of change, the constructive use of trouble, and the four principles of AA service, among other topics.